Christine Risley was a key member of Constance Howard’s remarkable and innovative textiles department at Goldsmiths College, and an influential figure in the craft of textile art in her own right. It is with great honour that the Textile Collection is able to host Christine Risley: Works & Research and honour the memory of an integral member of staff in the development of textiles as a craft at Goldsmiths.

Curated in collaboration with former colleagues and personal friends of Christine. Using original artworks and materials from the Textile Collection, Christine Risley: Works and Research presents an exclusive look at the life, works and influences of the late textile artist.

Christine was introduced to textiles at an early age by her Mother and Grandmother, who taught her to sew and knit. After winning a scholarship to Prendergast School, Lewisham, she was expected to go to University. However, she instead decided to go to Art School and enrolled on the intermediate Exam in Art and Craft at Goldsmiths in 1944. Christine specialized in painting though found it uninspiring as the style taught at the time favoured photographic representation over personal interpretation of subject matter. It wasn’t until she saw an exhibition of fabric collages by Constance Howard’s education students that she re-connected with her early interest in textiles, immediately identifying with this way of working that allowed for freedom in choice of imagery, colours and design.

After completing her Art Teacher’s diploma at Goldsmiths in 1949, Christine taught at Central Saint Martins. During this time she continued to produce her own work, exhibiting and selling through the ‘Pictures for Schools’ scheme, the Society of Designer Craftsmen and various galleries in the UK and abroad. ‘A Bird in a Cage’ (1951) is an example of her work from this period, which was pictorial, whilst often fantastical. Christine also undertook Design work for a range of companies including Sandersons, House and Garden Magazine, Triplex Glass and Jaeger. She often favoured pen and ink drawing. Recurring motifs can be identified from her sketches and drawings, such as the bird, which appear in her Design work for Yardley and the Palladio wall paper, as well as in her fabric collages. 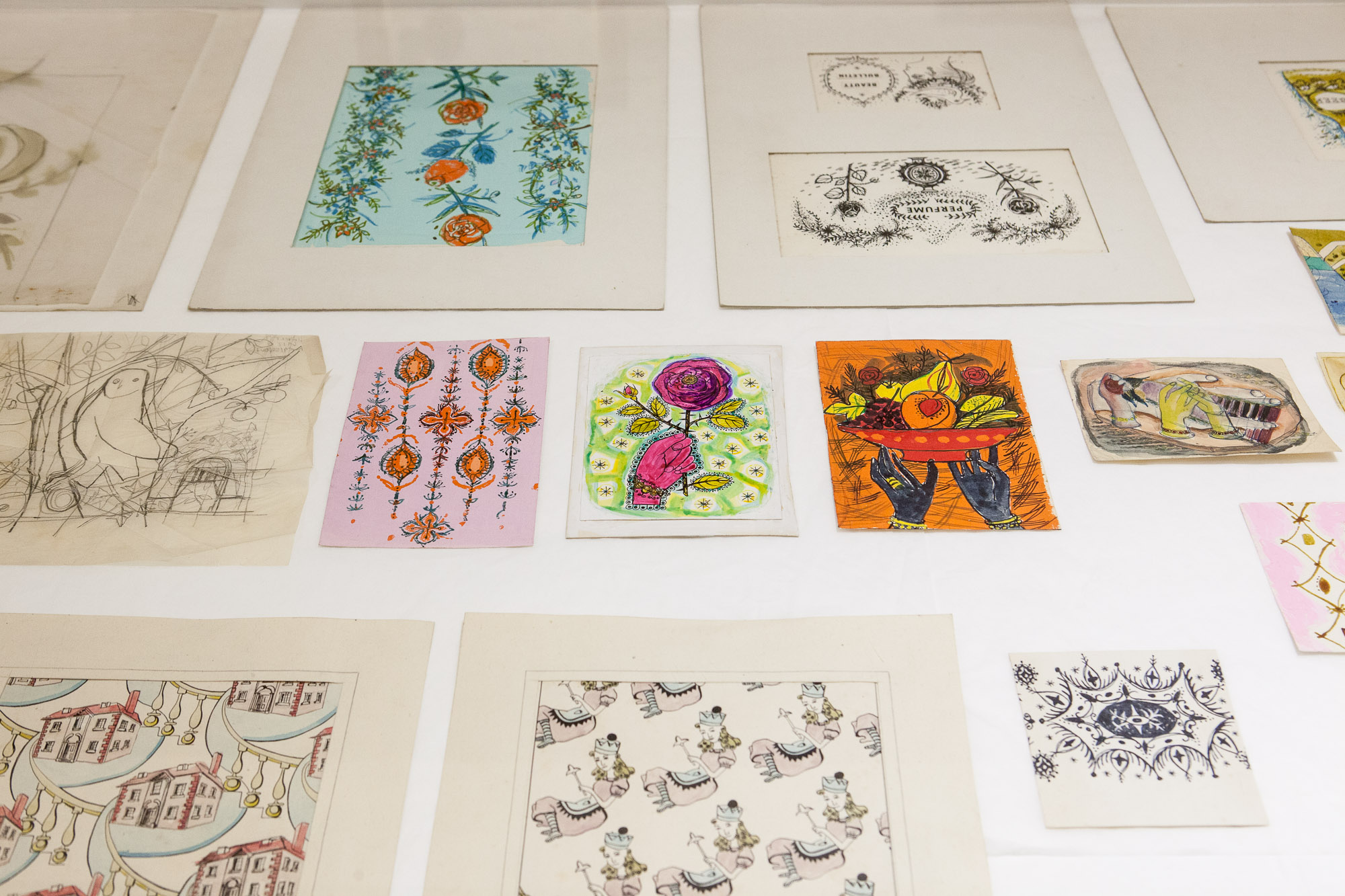 Christine enjoyed gathering together material and information, amassing a diverse collection of examples of machine embroidery, a selection of which are on display. The cabinets of objects and ephemera assembled from shelf displays in her house are also testament to her love of collecting. This tendency to gather, bring together and assemble is reflected in the fragmentary nature of her woks made in the 1980s, which came to characterize her style. She would combine influences from experiences and events captured through photography and drawing, as well as textiles she collected, and create scraps of Machine Embroidery which would later be pieced and stitched together. Much of this work was started in her sabbatical year from Goldsmiths in 1981. Around this time Christine began to experiment with abstract linear designs of Machine Embroidery, often working on clear plastic and layering or weaving together sections. This work is less known but an interesting insight into Christine’s continued commitment to pushing the possibilities provided by machine embroidery.

From starting out as a student at Goldsmiths, Christine Risley went on to leave a significant influence upon Goldsmiths and Textile Art more broadly, establishing the Machine Embroidery subject in the 1960s and later becoming the head of Textiles, before retiring in 1990.