The Women’s Art Library at Goldsmiths is brimming with amazing material. I have been fortunate enough to browse through the archive material on several occasions. Moreover, the library has been involved with a host of prestigious events. Take for instance the PILLOWTALK exhibition at Tate Modern. The exhibition focused around pillows, engraved with images that reflected the experiences and histories of women in South London. The main aim of the exhibition was to celebrate the historic milestone of women (only those over 30 and who met a property qualification) getting the vote in February 1918, as well as the achievements of women artists. To be able to host an exhibit at Tate Modern to me spells success. I felt a part of the exhibit, even if I did just shoddily place labels on some books used in the event.

The Women’s Art Library is a place where you can get lost for hours in the pages of magazines and artists’ slides. I am particularly enamoured by magazines from the company Spare Rib. Why is it called that you ask? Don’t worry, you were not the only one to think that. At first, I thought why would a women’s magazine company name themselves after a Chinese dish? After a bit of digging, I realised the title is fitting for the magazine after all. It was originally used as a joke, referring to the Bible. Eve was formed from the rib of Adam, and so it would be assumed that women were inferior to men. The title stuck as it perfectly reflected what the magazine company was all about: 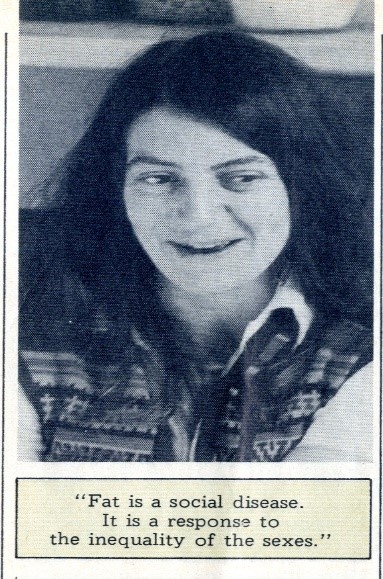 reversing this stereotype. You really have to read some of the magazines- they are beyond empowering. For more information about Spare Rib, please click on the link attached: https://www.bl.uk/spare-rib. Many of the topics broached are so relevant to today. One interview that really drew me in was called: Fat is a feminist issue by Susie Orbach. Susie, co-founder of the Women’s Therapy Centre in London, was a compulsive eater. She describes the unfair reality of being fat; being ordered to lose weight by going on every diet under the sun. She also links fat to power. I never would have thought that fat could represent strength, assertion and health until I read her interview. She also stated that you had to look beyond a person’s weight to uncover who they truly are. She argues that fat is commonly used by women as a means of bringing their intelligence to the forefront, instead of their beauty. Many people who lose weight said they felt like a doll, constantly drooled over by herds of men. Why must women try to hide away their physical attractiveness to be taken seriously in the work place? One has to wonder, can’t being self-indulgent be a way of showing you love your body? Restricting yourself to certain foods is just for an artificially constructed image.

Feminism is about far more than just physical appearance. It is not as simple to define as many would like to believe. Does feminism mean equality between the sexes, or superiority of women over men? There are internal debates on every topic under the umbrella of feminism. What must a women do to be a feminist? Some would argue that having a family equals a bad feminist. They are letting their family take precedence over their career and life goals. What about if a women’s life goal is to have a family, and since when did having a family mean you were giving up your career?

The other side of the argument links infertility to being flawed as a woman. We need to see women as more than just mothers and objects, or feminism really is not for all women after all. The thought-provoking moments that I get every time I visit the Women’s Art Library are insane. It is true that we never really stop to think about topics unless we are exposed to them frequently.

Please visit the Women’s Art Library. Bury your head in the wealth of journals, smell the glorious aroma of history and make it a visit YOU won’t forget.

The blog above is written by Danielle, a history at work student, who completed a placement with Goldsmiths Special Collections.